I was watching the Scripps National Spelling Bee this morning and it hit me, year after year, the kids all seem to be Indian.  A few years back my dad told me that Indians were so smart because they were educated by the English during the British Raj; I thought he was being bias because my dad was born and raised in England.  But according to the following explanation, my dad’s explanation was partially correct:

For millennia, India was a land where the poorest scholar was held in higher esteem than the richest businessman. This approach to life proved disastrous for modern India. Jawaharlal Nehru, the country’s first prime minister and a Brahmin to his manicured fingertips, had such contempt for business (and for profits) that his economic policies condemned his people to two generations of stagnation.

But Nehru would have approved of spelling bees. Indian pedagogy relies heavily on rote memorization–the result of a fusion of Victorian teaching methods imposed by the British and ancient Hindu practice, in which the guru (or teacher) imparted his learning to pupils via an oral tradition. (The Victorians, for their part, regarded correct spelling almost as a moral virtue, and certainly as a caste “signifier,” to use a clumsy anthropological term.)

So the act of sitting down for months with dictionary on lap, chanting aloud the spellings of abstruse words and then committing them to memory probably taps into an atavistic stream coursing through the veins of Indian bee-children. A friend tells the story of how, in his childhood, he’d had an Indian boy home for a sleep-over. He awoke in the middle of the night to find his guest poring over the host family’s Random House dictionary. “I own an Oxford dictionary,” the boy had said, by way of bizarre, nocturnal explanation. “This American dictionary is so different!” 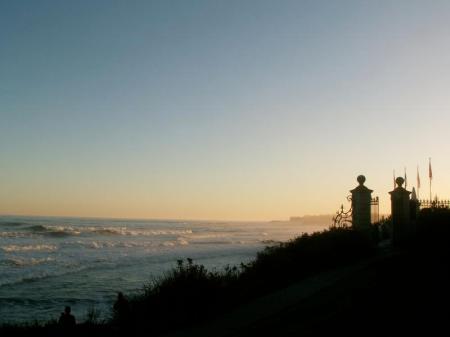 I was in Newport, Rhode Island a few years back and I took this photo from the front yard of “the Breakers” mansion.  Newport is well known for its annual jazz festival  and has hosted the America’s Cup a few times.  But what really brings tourists to Newport are the “beach cottages.”

Before there was a federal income tax, robber barons amassed large fortunes (often at the expense of other’s livelihoods) from unregulated capitalism.  New York financiers, Pennsylvania steel captains and Western railroad tycoons all built their summer retreats in Newport.  It was called the gilded age.  This is one of the most fascinating periods in American history, and if you’re interested in catching up on it, I recommend reading an excellent and classic novel: Edith Wharton’s The Age of Innocence.

Anyway, the Newport Mansions are beautiful and almost all are perched right on the shoreline overlooking the Rhode Island Sound.  I’ve posted a few more photos below. 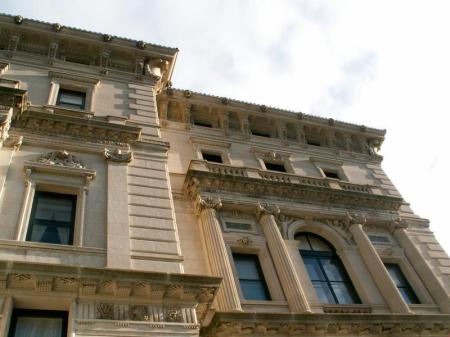 Interior of the Receiving Area 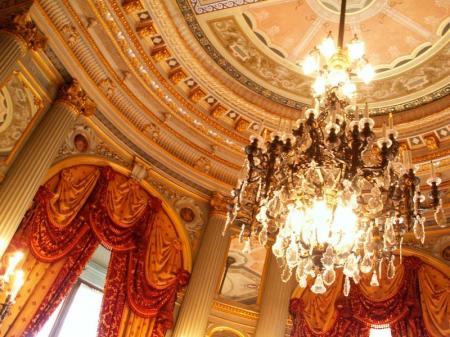 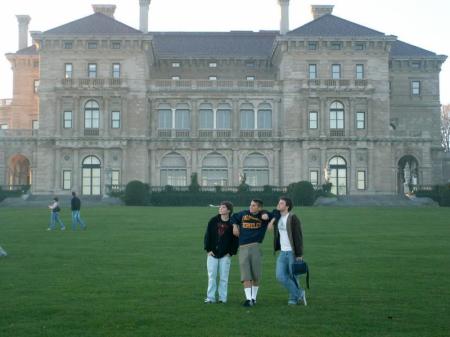 My friends Xan and Kevin

This mansion is called the “Breakers” (named for the breaking waves right out front of the property) and was designed by architect Richard Morris Hunt for Cornelius Vanderbilt.  The home is designed in the Beaux Arts style.  Keep in mind this home was built for one family.

Check out the waves out front!

The Breakers the home is named after

The Driveway and Port-Cochere in the Distance

I just watched this, and after laughing out loud at some of the comment these people spew, had to post it.  I am dissapointed to call myself American when these people are doing to the same.  It’s no wonder why most of the world hates us. Evangelicals really do scare me.

I took this photo in August of 2005 at the Manzanar national historic site.  This monument is dedicated to the Japanese-Americans that died while staying at Manzanar.  The mountains in the background are the eastern slopes of the Sierra Nevada.

Planning a trip to Spain…

SO MANY COUNTRIES, SO LITTLE TIME!

Eye in the Sky

I took this photo in April of 2006 while on a trip to London and Paris.  This is the London Eye, Europe’s biggest ferris wheel.  Check out the photo in full size and you can see the people in each pod.

Photo of the day

I’ve started a photo section and I will (try) to post a new photo each day.  The photos are one that I have taken and accumulated over the last 3-4 years.  Here is the first photo.

In 2005 the MCHS model UN team traveled to New York City and then to Montreal for a 3 day debate at McGill University.  This was my first time to the New York and that trip probably is the reason I have an affinity for the city.  I took this photo while standing on a bench at the South Street Seaport.  The Brooklyn Bridge is in the background.

Check out this Green City by Romses Architects

Health care reform won’t come cheap, and that’s why lawmakers are considering higher taxes on everything from alcohol and cigarettes to junk food and soda as a way to pay for it. The Senate Finance Committee is looking into how to pay for this massive overhaul, which could cost $1.5 trillion over 10 years.

So-called sin taxes may raise $600 billion over the next decade.

Several experts are suggesting taxes on bad behavior, including a $2 dollar tax on a pack of cigarettes and a higher excise tax on alcohol.

Politico reports that the ranking Republican on the committee, Senator Chuck Grassley is nixing the idea of taxing soda and sugary drinks. But it’s easy to see why so-called sin taxes are appealing — taxing cigarettes, junk foods and alcohol could raise $600 billion over 10 years.

A recent poll found support among Americans for imposing such taxes to help pay for health care reform. The Kaiser Family Foundation survey shows 61 percent of those polled say they would be in favor of raising taxes on items that are thought to be unhealthy — like cigarettes, alcohol, junk food and soda. 37 percent are opposed.

When asked about specific items, there’s more support for taxing cigarettes and alcohol than snack foods and soda.

But before you start hoarding your beer and chips, Congress is also looking at other ways to pay for reform — like eliminating the tax-free status of company health benefits along with non-health related options like capping the deduction on charitable donations.

No Posts for a while

STUDYING FOR FINALS ALL THIS WEEK!

The Story of Stuff

Check out the video at STORYOFSTUFF

Can you guess the cities that beat Los Angeles?

What makes a city great is a topic guaranteed to spark heated debate. Now architectural firm RMJM Hillier has ridden into the fray with a list of “America’s Best Cities for Design,” produced with the American Institute of Architecture and Zogby International. American cities with more than 500,000 inhabitants were judged according to criteria such as the quality of public transit, the number of LEED-registered buildings (indicating sustainable design) and how many of the city’s employees work within creative industries such as performing arts or publishing. Interviews with residents were also used to rate a city’s design factor, which takes in elements of a city’s architecture as well as its appeal as a home for creative types. Large cities such as Los Angeles feature in the top 10, along with smaller ones such as Portland, Ore. But Chicago’s greening efforts and architectural innovation saw it take top prize. Check out the winners here.

read the storypost a comment
VIA Businessweek
next slideprevious slide

my video from youtube was recently put onto the local news channel.  You can view the youtube original here.

The news segment is here.

Firstly, answer this question:  what do you see in the picture below???

What is above the woman’s head? When scientists showed a similar sketch to people from East Africa, nearly all the participants in the experiment said she was balancing a box or metal can on her head.

In a culture containing few angular visual cues, the family is seen sitting under a tree. Westerners, on the other hand, are accustomed to the corners and boxlike shapes of architecture. They are more likely to place the family indoors and to interpret the rectangle above the woman’s head as a window through which shrubbery can be seen.

after reading i looked again and yeah, i could see that thing at the back as a tree and not the corner of a room, and the window as a box on that womans head.

i like those kinds of things.. it clearly demonstrates that what we see is just our brain trying to make since out of things – based on what it knows already; makes you wonder what reality really looks like.

Reality is merely an illusion, albeit a very persistent one.
-Albert Einstein

via slash ninja
A similiar illusion . . .  What do you see?

Children see 9 dolphins as oppose to a man and women because they have yet to develop a sense of eroticism.

An episode of VH1’s Daisy of Love was on the t.v. today. . . I hope it never is again.  VH1 has been pumping out these shows of what they call “Celebreality.”  Usually some C-list hollywood producer takes a washed-up 80’s celebrity and puts them on their own show that somehow has to do with dating.  You may have heard of these shows: A Shot of Love with Tequila Tilli, Rock of Love, For the Love of Ray-J, I Love New York etc.

Since when does being a myspace sensation make you a celebrity anyway?
I think most people watch these shows for couple of seconds, get a quick laugh, and then move on to another channel.  In no way do they provide of any form of entertainment.  In fact, I believe the FCC should impose sanctions upon shows of this nature because of their tendencies to dumb down their audience.  There is no better way to waste 30 minutes of your life than to watch 20 low-lifes try to win a date with a poster-child for plastic surgery. So the next time you wander upon one of VH1’s shows, ask yourself what else you could do for the next 30 minutes that would actually stimulate your mind and be beneficial to your life.
I hope I have not sounded too harsh on those people who watch these shows or make them, but this is really how I feel.
.

Some very cool houses featured here.  From the Chicago Tribune